HyperFlex Is the latest hyper-converged offering to come to the market and it comes by the way of Cisco and a startup called Springpath. Hyperflex bundles the Springpath software on Cisco UCS C series rack mount servers with an option to add B200 M4 for additional compute capacity. Springpath is a Silicon Valley-based hyper-converged software start-up that has been laying low for more than two years. Its key product is a hyper converged software solution called Springpath Data Platform based on their HALO (Hardware Agnostic Log-structured Object) architecture. This announcement is interesting because Cisco already has a long standing partnership with EMC, SimpliVity, and has been selling VSAN ready nodes who all compete in the hyper-converged space. HyperFlex is now the third option to the convoluted portfolio but Cisco looks like it will be positioning its partnership with VxRail as a first generation hyper-converged appliance.

HX 220c, based on three 1U, C220 servers that consume 3U space to make up the 3 nodes in the base offering. It scales to a total of eight nodes at 8U.

HX 240c, based on three 2U, C240 servers that consumes 6U space to make up the 3 nodes in the base offering. It scales to a total of eight nodes at 16U. The Cisco B200 blade server can be added for additional compute.

Here is a brief rundown of a high level comparison the two offerings: 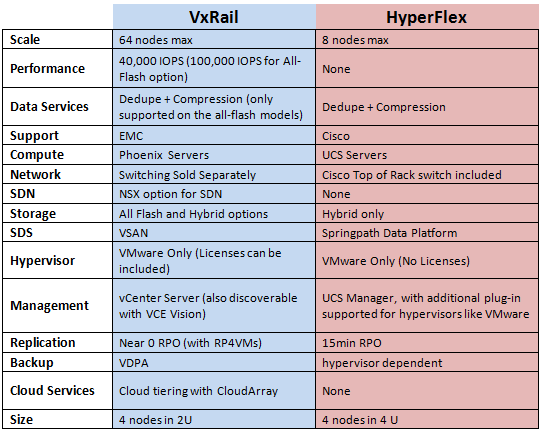 Hopefully as more details arise we will be able to do a more technical comparison of the two offerings.

This site uses Akismet to reduce spam. Learn how your comment data is processed.